I wrote a few days ago about a lady whose family had lived on Wilton St ( off Belgrave Gate).Well....

She and her brothers and sisters went to St Patrick’s school in Royal East St. A Leicester Mercury article states " the Victorian Gothic building was constructed for the town’s expanding Roman Catholic community. Later a church, built by Irish immigrant labour, was attached to the school forming a T shape. This became a separate parish in 1873 (it was originally attached to Holy Cross)." 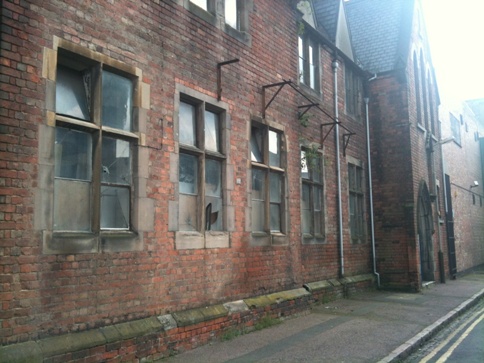 Spencer’s Guide to Leicester, 1888, describes the school as ornamental and well-conceived…"there are 500 children in the schools which Dominican Sisters teach. Being so handy and central it harbours children of many denominations who receive the same attention as the large colony of Irish children who crowd the courts and alleys of the district that lies between St Margaret’s and St Marks."

The Dominican Sisters had long gone by the time my friend attended the school. Miss Belton was headmistress and she transferred up to the new school. The priest was Canon George.

My friend remembers Carr’s button factory facing the school. The buttons were made from ivory and the children would suck cast off pieces strewn all over on the ground outside like sweets.This cherished cutting from the Leicester Mercury gives a little more information.

The school closed in 1937 and moved a new school on Harrison Rd for pupils aged 4-14. Catholics at the time collected money to help the cost of setting up the new school. While collecting money for the new school she recalls seeing terrible conditions in Wharf St. There would be 8 houses around a courtyard with a single tap between them: far worse conditions than anything she’d seen before.(More on Wharf St in a future blog.)

She met her husband in 1953 at Our Lady of Good Council on Moira St before the church moved out to Gleneagles Ave, He was an officer in the RAF She met him at a dance at the Birstall Social club-home. He lived in Birstall and was home on leave for the weekend. One of his friends was engaged to a friend of her sister’s and that’s how they met. 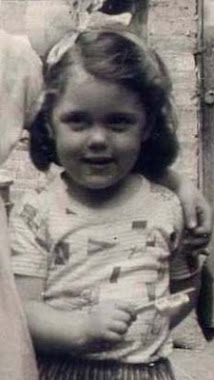 Hi, my name is Lynda Callaghan and this is my blog. Over the past couple of years I have been investigating the links and connections that helped build the strong Irish community that now exists in Leicester. I've been finding out who, when and where so as to create an historical picture of the Irish in Leicester.

However, I can't do it all on my own so how would you like to help?

I need dates and places, pictures and memories - any information you'd like to share from your very own family story. Just how did you get to be here in Leicester?

Read the stories here, click through to photos of our streets and houses and view the map to see where other Irish lived.

If you'd like you and your family to be part of that bigger picture post your comments here or call The Emerald Centre on 0116 276 9186.

The Irish in Leicester